In yesterday’s post, I talked about the song from The Police with “alabaster” (Wrapped Around Your Finger) in my head for a day.

Do you ever get an annoying catch phrase or song snippet cycling through your head? Over and over and over. Well, that was me with, “I will turn your face to alabaster…”

Good thing, I knew how to replace it with another song. Still in Marrakech, I wanted to visit the kasbah. 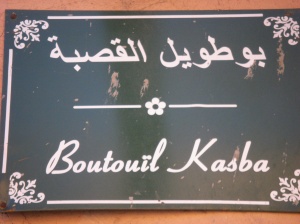 Walking there from my hotel, walking around the kasbah, walking back to the hotel, for most of the day, the new song in my head was Rock the Casbah by The Clash. This song is more political than the other two I mentioned. Well, just the tagline rolled around my head. Again, for hours–rock the casbah, rock the casbah.

Kasbah, by the way, is a walled, fort area, usually with a medina (oh, yeah, the 4th Song of Morocco would be Funky Cold Medina–you will be quizzed!).

The Marrakesh kasbah has several entrances but none is grander than the Bab Agnaou. 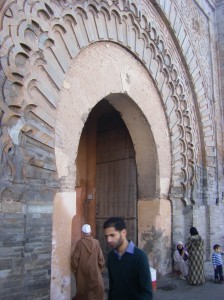 The 12th century walls have countless holes that are homes for pigeons. The tops of the walls have huge African stork nests. 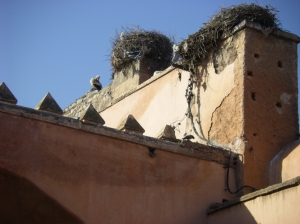 Life inside the kasbah is more relaxed than in the Djemaa el Fna medina. There are vendors, stores, and hustlers–just not the overwhelming amount as in the very touristy Djemaa. 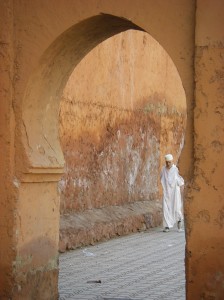 The kasbah is a bit off the beaten path but still visited by westerners. In fact, I saw two different large buses stop there during my visit but no other solo tourists. Once I got off the one or two main paths where the tours visited, I really enjoyed the authenticity of the kasbah.

Here is a typical residential courtyard. 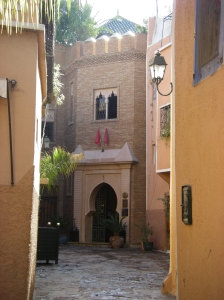 This door must be at least as old as the 12th century walls. 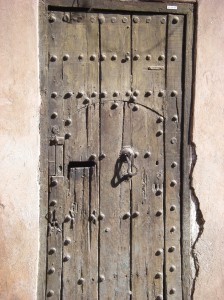 One thought on “Songs of Morocco, Part 3”